Who slipped study into 'Study Abroad'? 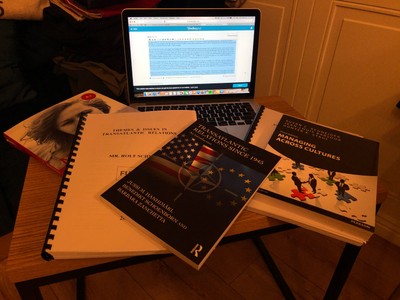 So after a week of "acclimating" to the diet of cheese, meat, bread and beer and doing nothing but traversing the city with nothing else but time, Monday morning decided to rear his ugly head and remind all of us that there are two words in the phrase 'study abroad' and that one of those words is a bit of a prerequisite for the other... Unfortunately.

Let me start with Sunday night. Super Bowl Sunday was this past weekend and being the American that I am, well of course I had to watch it. There was just one little thing. Time zones are a thing and so that meant that while everyone back home was enjoying Super Bowl Sunday on their 70 inch plasma's, I was struggling to remain awake just long enough to forget that I had class early the following morning. All of this while huddling around a laptop screen as we streamed the game in the kitchen. I affectionately began calling it Super Bowl Extremely Early Monday Morning instead of using the traditional holiday name that we all are so fond of. Long story short... I went to bed around 3:00am with plans to meet up in the morning at 8:10am (five short hours later) before we all left for campus on our journey as now commuter students.

The next morning I woke up at 7:00 as my alarm screamed at me to get up and get in the shower. So I rolled over and then... well then I woke up at 8:05. I had five minutes to leave. Did I have time for a shower? No. Is it really? Yes ok I have five minutes. Where are my pants? Jacket? Shoes? Out the door. Wait my keys! Checking my pockets I deduced that I had everything and we got to the train station down the street at approximately 8:25. We boarded the train and began our journey to the Lankwitz campus of Freie Universität. It was a 30 minute adventure via a train and one bus. I had 35 minutes to get there and Dylan had 25. One of us was going to be late if not both.

My German language class was fun and it seems like I am going to learn a lot. The professor is a little crazy but he seems cool nonetheless. Daniel is his name and he taught us some basic introductions such as how to say your name, where you are from, and where you were born as well as how to have a conversation with these topics. I am not usually one to talk in class as I retain information more usually through just listening to the conversations happening but I was happy to see that I was one of the only ones in class answering the professors questions.

Lunch was right outside the classroom building in a separate building known as the Mensa (like a cafeteria). The Mensa is really cool because you pay per item instead of by amount. So if I buy two potatoes it would cost the same as eight potatoes. I got an extremely large plate of potatoes and then two pieces of a roast. A bunch of us sat with Nele and Janine (the resident director and assistant resident director respectively) and we just had conversations about how we were settling in and some events that would be coming up soon.

After lunch I headed off to my Themes and Issues in Transatlantic Relations class and prepared for a two and a half hour long class. I hadn't gotten a great nights sleep the night before so I was very tired and so I found it increasingly hard to keep my eyes open during the class. Professor Rolf Schnelle is an older professor who is definitely qualified to be teaching this class. He is a German native who lived and worked in the states during the Reagan administration, he has worked in numerous foreign affairs offices around Europe and America, and he even drove from Seattle to New York City in a Volkswagen bug

But above all what is coolest about him is that he is one of the original 68 students who founded the university way back in 1948.

For some more information on the background of Freie Universität, click on the following link...
https://www.fu-berlin.de/en/universitaet/leitbegriffe/gruendungsgeschichte/index.html

For a video on the university as well, click on the following link...
https://www.youtube.com/watch?v=X86SiAP36D0

The Free University of Berlin has such an interesting history and the link above is not very long. I implore you to give it a read (or watch the 11 minute video). I am so beyond fortunate to be able to study at such an esteemed and enriched university.

It was now 4:30 and I was exhausted. The sun was setting and I still had one more 2.5 hour class left. The last class of the day was European Business Cultures and my professor is a lady originally from Bulgaria. This class for sure is going to be interesting as there is a field trip to Sanofi, a French-German success merger, scheduled for the end of this month. Sanofi is the world's third largest pharmaceutical company by turnover rate in the global industry and so I am excited to listen to the VP of Public Affairs share his insight into the particular marketing challenges in different European countries. This class seemed like it took forever but there are plenty of my newfound friends in this class so I'm sure it won't be unbearable by any means.

Class ended and I made my way home before heading off to bed. I have a two day weekend in Tuesday and Wednesday so i didn't go off to bed until around 2:00am early Tuesday morning.

A really cool part about attending a university in Germany is that in Europe, schools do not force their students to buy $500 even up to $700 in some instances in textbooks each semester, to sometimes not even use them. Instead, European professors put together their own compilation of different readings from different books and then they print out their own sort of custom textbook for each student. And the actual books the professors want students to have only cost about $30 or $40. Not anywhere near the $100's that we as students are used to at home.

While the studying part of studying abroad hit me harder than a train full of bricks, I still am excited nonetheless. My classes so far seem intriguing and the conversations that are being held in the classrooms are even more so. I still have one class that has yet to have been held but I am excited to see what is in store for me on Thursday in 'Europe in the Global Economy'. I will report back then but for now I will just continue to try to enjoy my weekend in the middle of the week.

Until then! Auf Wiedersehen!

Previous Next Table of contents

Comments on this blog entry are now closed to non-Travellerspoint members. You can still leave a comment if you are a member of Travellerspoint.

If you aren't a member of Travellerspoint yet, you can join for free.